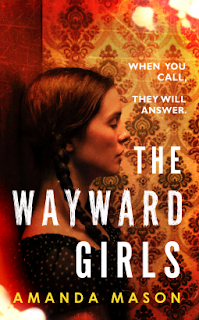 Wow....just wow and wow again. I really really loved this beautifully written,haunting but also quite tragic tale. Once I started reading it,I didn't want to put it down and when I had too because of the inconveniences of every day life, I couldn't get the story out of my head. It was like it was calling me,enticing me back to carry on reading.

Sister's Lucia (Loo) and Bianca (Bee) finds themselves the subjects of a paranormal investigation by Professor Michael Warren and his colleague Simon Leigh after stories appear in the national press reporting instances of possible paranormal activity at the isolated farmhouse that Loo and Bee share with their three brothers, mother Cathy and their father Joe.

Loo,who is now known as Lucy isn't very impressed when a young woman called Nina Marshall contacts Cathy who is now in a residential home suffering from dementia,enquiring if it would be possible if she could interview Cathy and her children about events that happened at the farm. Nina and her colleagues Lewis and Hal have set themselves up at the farm because Nina is determined to complete the unfinished original investigation.

Cathy wants to know the truth about what happened all those years ago but Lucy and her brother Dan are not interested in digging up the past and would prefer it if everything was left well alone. Things and people were not what they appeared to be,both in the present and the past. Secrets,lies,manipulations and deceptions are revealed culminating in a breath taking conclusion where the past and the present merge together in a shocking confrontation.

The chapters of this totally mesmerising story flip.back and forth between then and now,there is also.some chapters towards the end of the book that are set in both time frames. The chapters are narrated by numerous characters including Loo,Bee,Nina and Michael. The author cleverly manipulates the reader,making you trust the characters one minute and then doubt them the next. I was constantly changing my mind about wether I liked or disliked the main characters as I frantically turned the pages. I definitely didn't like Bee for various reasons nor the judgemental people who lived in the village that was near the farm. I loved the isolated ramshackle farm were the girls lived when they were younger. I also.loved the supernatural elements to this story,some of them were truly intense and spine chilling.

I genuinely cannot believe that this brilliant book is a debut novel,
it's extremely well written,the characters were vivid and realistic. The truth is gradually revealed,the author gradually feeding the reader tantalising clues,keeping you guessing and completely invested in her characters fictional worlds. The best way to truly enjoy this book is to keep a completely open mind,settle back in your comfy chair and enjoy. I would have given this book far more than five stars if I could and I look forward to reading more books by this author in the future. Very very highly recommended.

Amanda Mason was born and brought up in Whitby, North Yorks. She studied Theatre at Dartington College of Arts, where she began writing by devising and directing plays. After a few years of earning a very irregular living in lots of odd jobs, including performing in a comedy street magic act, she became a teacher and has worked in the UK, Italy, Spain, and Germany. She now lives in York and has given up teaching for writing. Her short stories have been published in several anthologies. The Wayward Girls, her debut novel, was longlisted for the Deborah Rogers prize.