Blog Tour Review and Q&A : If He Wakes by Zoe Lea

Best friends and business partners Rachel and Suzie find their friendship tested and pushed to breaking point due to the actions of the men that they love in this gripping tale of friendship,secrets,lies,manipulations,misconceptions,relashionships and revenge.

After discovering a Twitter message arranging a romantic liaison,Rachel assumes that her husband is having an affair,so she follows him and is shocked and devastated when she witnesses him running someone over with his car.

Meanwhile Suzie is increasingly worried about her fiance who she hasn't heard from for days.When she learns that huge debts have been raked up in her name she fears he has run out on her,but after she starts receiving threatening phone calls she begins to wonder if something terrible has happened.

The chapters are quite long and alternate between Rachel and Suzie`s points of view.I thought that Suzie was a very likeable character but I didn't like Rachel very much for most of the book for various reasons.The author`s depictions of Rachel's reactions to having to use crutches were over dramatic and caused Rachel to come across as a bit of a drama queen.Both characters chapters contained some intreguing twists and turns and quite of number of them ended on a cliff hanger causing the reader to have a very bad case of just one more chapter syndrome.

This is a very well written debut thriller,the characters are realistic and vivid and the story holds the readers attention from the first page right through to the believable conclusion.The story is quite uncomfortable to read at times but the subject matter is written with sensitivity and isn't over graphic.This book would definitely cause some interesting discussions if it was read by a book group

Q : HAVE YOU ALWAYS WANTED TO BE A WRITER?

A : More or less.I loved creative writing at school and when I was about seventeen,I got a short story published in a magazine and since then I have always been scribbling stuff down.

Q: WHY DID YOU DECIDE TO WRITE A PSYCHOLOGICAL THRILLER?

A : After years of trying to write a young adult novel and it getting nowhere,I decided to have a go at writing the type of book that I would love to read.I'm a avid fan of thrillers and crime novels,so when I got the idea for If He Wakes,I went for it.

Q : WHAT WAS YOUR INSPIRATION FOR IF HE WAKES?

A : A friend of mine was discovered as having an affair,it was a massive shock at the time and one of those things that leaves you wondering about past events for days afterwards.I'd just had a baby at the time and the revelation of someone so close to me keeping such a secret stayed on my mind.I remember thinking,`There's much worse you could find out about your spouse than them having an affair,`and the idea jumped out from there.

Q : AS A PARENT SOME PARTS OF THE STORY HARD TO READ,HOW DID YOU COPE WITH WRITING ABOUT SUCH A UPSETTING SUBJECT?

A : It was so hard! Some of those scenes left me wracked with anxiety and where extremely difficult to write,it's not a area I wanted to write about but the characters and plot called for it.I think that's part of the excitement in being a writer,you're continually challenging yourself to go to places that you would rather stay away from.

Q: DO YOU HAVE A FAVOURITE CHARACTER IN IF HE WAKES,IF SO WHO WAS IT AND WHY?

A : My favourite character was Suzie.I love the feisty nature of denial she has about her,and her ability to be quite aggressive about her version of the truth.Some of the lines she says in the book really made me smile.

Q : WHO ARE YOUR HEROES OUTSIDE LITERATURE?

A : I admire a lot of the other working parents I came across.Anyone who can show up day after day for work,juggle childcare as well as keeping everything else together is a hero in my book.

Q : HAVE YOU READ ANYTHING RECENTLY THAT YOU WOULD RECOMMEND?

A : I just recently read The Paying Guests by Sarah Waters.The unease and tension throughout the book is brilliantly done.

Q : CAN YOU GIVE US ANY HINTS ABOUT WHAT YOUR NEXT BOOK IS GOING TO BE ABOUT?

A : It's still very much in the early stages,but it's about a woman who takes revenge on the alpha mummies at her son's school in the worse possible way.

Zoe Lea lives in the Lake District with her husband, two children, three dogs and peregrine falcons. She has previously worked as a teacher, photographer, freelance journalist and is a writer by day and a reader by night. IF HE WAKES is her debut novel. 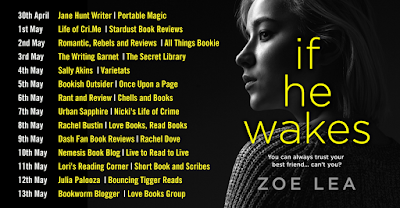