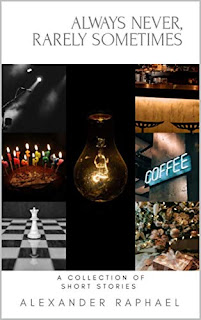 An aspiring magician who gets a sinister pleasure playing all kinds of tricks on those around him. Two strangers running into each after 20 years and wondering what they’ve missed. A long-suffering husband who decides it’s time he started making big decisions. An unhappy child at Christmas struggling to deal with his new surroundings before a wonderfully surprising encounter.All this and more within the seven stories of Always Never, Rarely Sometimes, where a wide range of characters are forced to challenge long-held beliefs and powerful memories, accompanied by a sprinkling of magic.Always Never, Rarely Sometimes is the third book from Alexander Raphael, following on from his short story The Summer of Madness and his set of conceptual short stories Illusions, Delusions. Cover design by Hope Nguyen.

This enthralling book consists of a collection of seven short stories whose plots cover a wide range of genres, relatable life experiences, issues, emotions and interactions. There was a story that would suit every reader, no matter what genre you enjoy reading and the cast of realistic characters, quite a number of whom were not very likeable, were vivid and well rounded. There was a number of unexpected twists and turns, a wonderful case of poetic justice and the final story was a heart warming festive tale where young Johnny learns a very important lesson in life. My favourite stories were The Prankster, Lies And Secrets, Lucky/Unlucky and Motive, Murder And Method. A enjoyable, entertaining read that is perfect for curling up with in your favourite reading chair and losing yourself for a few hours. 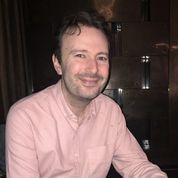 Half-Welsh, half-Mexican and growing up in London, Alex Raphael was surrounded by different influences and interests. But it was always books that spoke to him most and had the greatest impact. He started writing when at college, where his love of reading evolved into a desire to write, in particular focusing on poetry and short stories. Studying English and American Literature at university meant he took a break from writing, as well as giving him the chance to see more of Mexico on his travels. He concentrated on his journalistic career while working on different writing projects, but his favourite genre of literature has always been short stories as they are what first inspired him to write.

That’s why his first book was The Summer of Madness, a romantic short story that tells of a guy who goes out to try to win his ex -girlfriend back. Will you be rooting for Kurt and his big public gesture or is it more complicated than that and you don’t want her to date him again? Either way you’ll get to know a memorable set of characters along for the ride.

His second book Illusions, Delusions reflects Raphael’s love of alternative short stories from the writers of his childhood and challenges the idea of the narrative. Will your favourite be the story in the form of a questionnaire, a poem or a set of jokes, among the seven very different styles?

Alexander Raphael’s latest offering is Always Never, Rarely Sometimes, featuring original premises and distinctive characters with his trademark imagination , humour and memorable dialogue. Among others, meet a sinister magician with an array of pranks, a long-suffering husband finally becoming more decisive and a group of young guys intrigued by a pretty woman on another table.