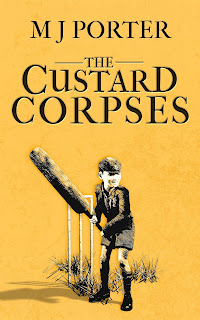 BOOK SYNOPSIS
While the whine of the air raid sirens might no longer be rousing him from bed every night, a two-decade-old unsolved murder case will ensure that Chief Inspector Mason of Erdington Police Station is about to suffer more sleepless nights.Young Robert McFarlane’s body was found outside the local church hall on 30th September 1923. But, his cause of death was drowning, and he’d been missing for three days before his body was found. No one was ever arrested for the crime. No answers could ever be given to the grieving family. The unsolved case has haunted Mason ever since.But, the chance discovery of another victim, with worrying parallels, sets Mason, and his constable, O’Rourke, on a journey that will take them back over twenty-five years, the chance to finally solve the case, while all around them the uncertainty of war continues, impossible to ignore.

Sam Mason, Chief Inspector at Erdington Police station, is about to endure an uncomfortable conversation with the brother of the murdered boy, Robert McFarlane.
“I saw the paper last night,”Sam confirmed. “I was expecting you. And no, I’ve nothing new to offer. It’s been many years now, and while I would hope one day to catch the perpetrator, I just don’t know if that’s possible. Not now.”
Rebecca nodded, almost too eagerly, her hand hovering over the mug of tea, waiting to pick it up until the movement had stopped. Her cheeks were flushed, and he wondered what else she’d come to tell him.
“I don’t truly know what I’d do if we ever found who murdered my brother. I like to think I wouldn’t spit in their face, but I can’t make such a promise. He’d have been a man now, probably off fighting in the war and maybe with children of his own. He certainly wouldn’t be the brother I remember when I think about him, the one who used to pull my hair and laugh at my squint.”
He nodded. Rebecca was wise beyond her years. She always had been.            “And how is your sister?”
Rebecca lifted the mug to her lips to cover her feelings, but he knew that the younger sister had struggled through the death of her brother and mother. It was unlikely that she’d ever marry.
“Patricia lives with my Aunt now, in Weston. They, well, it pains me to say it, but they’re good for each other. Both of them live firmly in the past. My Aunt lost her husband in the Great War as well and her only son in the air raids a few years ago on Weston. She married a wealthy man, though, and has enough money to support them both without either needing to work. It’s just better this way, although I do miss her.”
There was both regret and relief in Rebecca’s voice, and he well understood it. Living with the embodiment of what had happened was a draining experience. It seemed right that at least one of Robert’s sisters were able to live a full life, as untainted as it could be, by what had befallen him.
“That’s why I’m here, actually,”Rebecca’s sudden change of tact startled him, and he realised she was fumbling in her petite blue handbag, the shade perfectly matching her coat. He almost groaned when she pulled a crumpled newspaper from its reaches and passed it across the desk, over the plate of untouched biscuits. He was just about to say that he already had one when his eyes focused on the headline.
“The Weston Mercury,”and then he scanned down, and he couldn’t help himself. His hand snaked the newspaper towards him, his eyes focused on the grainy image of the smiling boy who looked so much like Robert. He checked the date, a month old, and then he read the headline.
“Murder victim would have turned twenty-four today. Family still seeking answers.”
He glanced at Rebecca.
“What is this?”
“I found it on the train, on the way home. It reminded me of what happened to Robert.”
Sam was already nodding, his mind trying to filter through the possibilities. It was all too familiar.
“But we asked other forces, and none of them ever said they’d had anything similar.”
“This was after Robert’s death,”and her red-polished nail pointed out the date when the young lad had disappeared and been found murdered. There were few enough details, not so long after the fact, yet he could immediately see why Rebecca had brought him the newspaper.
“I’ll look into this,”he promised, already feeling a strange stirring of anticipation. After all this time, was it truly possible that their murderer had struck again? Had Robert’s death not been an isolated occurrence?
“I thought you might,”Rebecca nodded, relief on her young face. He had the feeling she’d been torn about whether to share the information or not.             “You’ve done the right thing, thank you. I’ll get in touch with the police force in Weston and see what they can tell me.”
AUTHOR BIO
I'm an author of historical fiction (Early English, Vikings and the British Isles as a whole before the Norman Conquest) and fantasy (Viking age/ dragon-themed). I’ve recently written a relatively modern mystery novel set in 1943. I was born in the old Mercian kingdom at some point since 1066. Raised in the shadow of a strange little building, told from a very young age that it housed the bones of long-dead Kings of Mercia and that our garden was littered with old pieces of pottery from a long-ago battle, it's little wonder that my curiosity in Early England ran riot. I can only blame my parents!
I write A LOT. You've been warned!
Find me at www.mjporterauthor.com and @coloursofunison on twitter.
Social Media Links –
https://mobile.twitter.com/coloursofunison
https://www.instagram.com/m_j_porter/
https:// www.goodreads.com/ author/ show/ 7163404. M_J_Porter
https:// www.pinterest.co.uk/ coloursofunison/_saved/
PUBLICATION DATE: 25th March 2021
PURCHASE LINK.....
https://www.amazon.co.uk/Custard-Corpses-delicious-1940s-mystery-ebook/dp/B08VHLRK93/ref=sr_1_1?crid=2S6L16IBU5K6&keywords=the+custard+corpses&qid=1637278143&s=books&sprefix=The+custard+%2Caps%2C163&sr=1-1
THE ERDINGTON MYSTERIES
1: The Custard Corpses
2: The Automobile Assassination

Giveaway to Win 2 x copies of The Custard Corpses (Open INT)
*Terms and Conditions –Worldwide entries welcome. Please enter using the Rafflecopter box below. The winner will be selected at random via Rafflecopter from all valid entries and will be notified by Twitter and/ or email. If no response is received within 7 days then Rachel’s Random Resources reserves the right to select an alternative winner. Open to all entrants aged 18 or over. Any personal data given as part of the competition entry is used for this purpose only and will not be shared with third parties, with the exception of the winners’information. This will passed to the giveaway organiser and used only for fulfilment of the prize, after which time Rachel’s Random Resources will delete the data. I am not responsible for despatch or delivery of the prize.
https://www.rafflecopter.com/rafl/display/33c69494455/
PLEASE REMEMBER TO CHECK OUT THE POSTS OF THE OTHER BLOGGERS WHO HAVE STOPS ON THIS BLOG TOUR 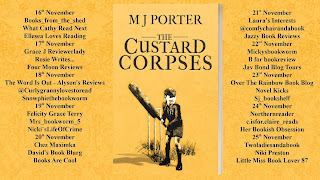